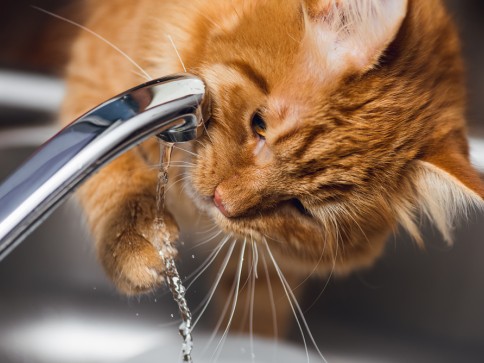 Diabetes is well recognised in humans, and it’s also a fairly common disease in both dogs and cats. It can be a challenging condition to manage, and requires a lot of commitment from pet owners to do so successfully. For these reasons, it’s worthwhile being aware of the signs that could indicate that your dog or cat has diabetes, because catching it early helps to minimise any undesirable consequences that could result.

Diabetes Mellitus (DM) can occur in two forms among pets, and refers to a true or relative lack of insulin. Insulin is the hormone secreted by the pancreas in response to rising blood glucose levels (as occurs after a meal). It helps the cells take up glucose and stimulates the body to store excess glucose for reserve, this maintains the blood glucose level within the normal range in a healthy pet. We see two types of diabetes in dogs and cats, the first (as with Type 1 DM recognised in children and young adult humans) occurs because of inadequate insulin being produced by the pancreas. This is often because the body’s own immune system has attacked the pancreatic cells, meaning there just isn’t enough insulin available.

The second type, which we are appreciating more frequently and correlates with increasing numbers of overweight pets, is similar to Type 2 DM in humans. Here, there is what we refer to as a ‘relative’ lack of insulin. This means that, although there is insulin being produced by the pancreas, the body’s cells can no longer respond to it appropriately, and therefore the blood glucose cannot be maintained within normal limits. This often occurs in conjunction with being overweight or obese, because here, over time, the body cells can become gradually switched off or resistant to the effects of insulin.

The lack of insulin, or proper response to it, means that the blood glucose level will fluctuate outside of its normal limits, sometimes getting dangerously high and leading to a hyperglycaemic (blood glucose too high) crisis that can be life-threatening. When the glucose level is too high for a period of time, we start to see signs such as drinking and weeing more, often owners will notice accidents in the house, or that they are having to fill up water bowls more frequently.

Pets will often have voracious appetites but be losing weight. This is because the glucose available in the blood can’t be accessed, so the body is stimulated to ingest more food, meanwhile reserves like fat and even muscle are broken down to try and supply the deficit. We often notice some gastrointestinal disturbance, like vomiting or diarrhoea, and the pet being more lethargic than normal. A dog or cat suffering a hyperglycaemic crisis may be difficult to rouse, very lethargic and potentially have seizures, often after demonstrating more subtle signs in the days, weeks or months prior; this is an emergency.

Another common effect of ongoing DM is ketoacidosis. This occurs because the brain needs glucose from the blood to function; in the absence of insulin, however, brain cells risk being starved of fuel. To feed the brain, the body produces ketones; in the short term, these solve the problem, but at the cost of making the blood dangerously acidic. This will eventually result in diabeteic ketoacidosis – typically a sudden worsening of signs, severe dehydration, often vomiting, collapse, and shock. It is an emergency and needs urgent treatment.

If you notice your pet is off colour, particularly if they seem to be gradually deteriorating, it’s always best to let us check them over. Even if the signs seem subtle they might be early red flags indicating that something more serious, like diabetes, is brewing.

There are many complications that can arise from diabetes, including urinary infections and cataracts (where the eye’s lenses become opaque, leading to blindness). The sooner we can catch it and start appropriate treatment, the less likely the chances of your pet suffering serious complications from the disease.

The treatment can be intensive and means a lot of input from owners, but it can be very rewarding, often strengthening the bond with their pets. Treatment options can vary but generally requires insulin supplementation through twice daily injections, attention to the diet to ensure the same quantity and type of food is being ingested at mealtimes (to help prevent fluctuations in the blood glucose and help stabilise the pet) and weight management. The exact treatment does vary between dogs and cats, and between individual patients – it depends on many factors including whether the owners are able to inject insulin at home, when and how much the pet eats, the presence of secondary complications and the results of blood and other tests.

If we suspect your pet may have diabetes, we will generally start with blood and urine analysis after doing a thorough physical exam and chatting with you to determine any changes in their behaviour or routine. We understand it can be a daunting and difficult condition to manage and are there every step of the way to help our pets and their owners deal with this complicated disease as successfully as possible, so they can lead a normal and happy life.